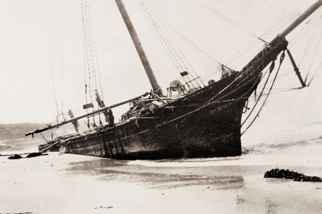 Over the last two centuries, some 300 ships have met their fate among the rocks and reefs of the Santa Barbara Channel Islands. Stately four-masted steamships ferrying gold and lumber, nimble rumrunners dodging the Coast Guard, rustbucket harpooners hunting seal and otter — all done in by the tricky currents and erratic weather that churn… Read More

Ranger, the flagship of the Santa Barbara Maritime Museum, is a classic big-game fishing yacht. In 1917, she was the first private sport fishing boat built on the West Coast and played a major role in the early popularity and growth of sport fishing in Southern California and Baja California. The 42-foot vessel served as… Read More

The 28-foot Monterey fishing boat was built in 1926 in San Francisco, California. Boats of this kind were introduced in California by Italian immigrants around the turn of the century and served as the primary vessels in San Francisco’s crab, salmon, and shrimp fishing fleets. Owned by Mike McCorkle.

The 14-foot Sea Mew sailboat is based on the original 1916 Sea Mew prototype designed by Fred Goeller, Jr. Developed to introduce young sailors to the bays and harbors of the East Coast, sea mews quickly grew in popularity as they were known for being sturdy, fast, and inexpensively constructed. By the 1920s, the Santa… Read More