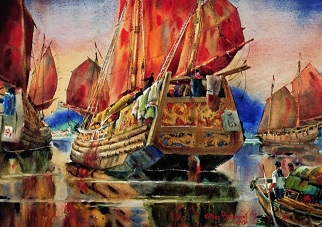 ARTHUR BEAUMONT: Art of the Sea

The Santa Barbara Maritime Museum is delighted to announce that Arthur Beaumont: Art of the Sea–an  exhibit of 53 paintings chronicling the accomplishments of the US Navy, from the USS Constitution to atomic bomb tests and expeditions to the North and South Poles—will be at the Museum for just six months, the last show on the West Coast before it leaves for the East Coast. Beaumont used Impressionist techniques in painting the stunning images in this exhibit and in capturing the majesty of the oceans and the vessels that sail them.

In addition to Beaumont’s paintings, the show will be accompanied by a book of his life and art, also entitled Arthur Beaumont: Art of the Sea, written by Beaumont’s son Geoffrey Campbell Beaumont and published by The Irvine Museum in Irvine, California. Then, on January 21, 2021, the author will offer a presentation about the exhibit and his father’s life as part of SBMM’s distinguished lecture series.

Arthur Beaumont (1890-1978) was born in Norfolk County, England and came to the US in 1908 to study art at Berkeley, before moving to Los Angeles and opening his first commercial art studio in 1917. After studying further with other artists in the US and Europe and teaching art and watercolor painting, Beaumont received a commission as a lieutenant in the Navy and became the “Artist of the Fleet” by 1933. His earliest paintings showed naval vessels in various settings and states of preparedness, but following Pearl Harbor, his work supported the US war effort and reflected dramatic life or death struggles in the Pacific and, in 1944, he was given the official title of War Correspondent.

Following the end of World War II, Beaumont became the official artist for Operation Crossroads, documenting the Navy’s first tests of the nuclear bomb, and continued to travel with and paint for the US Navy on missions to China and Japan. In addition to his work during the Korean War, in the production of movies, in private commissions and personal painting, Beaumont accepted three assignments from the Navy in the 1950s and 60s to paint frozen landscapes in Alaska and Antarctica. Over the remaining years of his life, he painted the RMS Queen Mary as it arrived in Los Angeles, a series of Revolutionary War-era sailing vessels, portraits of prominent naval officers, and operations along the Mekong River during the Vietnam War.