The American Launch of GRAJAGAN Surfing in the Tiger’s Lair: G-Land 1872-1984

The Santa Barbara Maritime Museum (SBMM) will host the U.S. launch of another surfing story, Mike Ritter and Jack McCoy’s recently released book, GRAJAGAN –  Surfing in the Tiger’s Lair: 1872-1984, with a book signing event on Friday, November 18 from 6-8pm. This event, which is free and open to the public, coincides with Australia-based Cyclops Productions’ introduction of its ocean and surfing related titles to American audiences. Attendees will have the chance to meet and talk with author Mike Ritter and publisher John Ogden, both of whom will be available to sign copies of their books.

According to John Ogden, “GRAJAGAN –  Surfing in the Tiger’s Lair: 1872-1984 has been a long time in the making. Co-authors Mike Ritter (author of Thai Stick) and filmmaker Jack McCoy have researched and documented the early days of discovery at Grajagan, one of the crown jewels of surfing and the site of the world’s first surf camp. As well as their own eye-witness accounts, they conducted hundreds of hours of interviews with those who were there … and who survived to tell the story. Many of the main players in this incredible story are Americans … Grajagan is more than just a record of Indonesia’s motley crew of surfing pioneers. It lifts the lid on the prehistory and mystery of a magical part of East Java, a place where Western surfers found their Shangri-La and were bewitched by the jungle spirits and wild animals harbored there.” 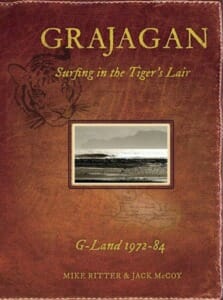 “’Grajagan – Surfing in the Tiger’s Lair’ unravels the mystique of east Java’s jungle-fringed, fantasy wave. The most anticipated book release in surfing for some time.” Luke Kennedy, Tracks magazine

John Ogden is a respected writer, publisher, educator, cinematographer and photographer based in Sydney, Australia, who began his career as a photojournalist in Southeast Asia during the early seventies before free-lancing for numerous magazines. He established Cyclops Press in 1999 as a vehicle to publish books that promote the work of Australian authors and photographers, many of which strive to promote awareness of First Nations culture. In recent years the company has also focused on a Surf Series of books, including Whitewash, Unearthed, Cactus, Saltwater People of the Broken Bays, Salt Water People of the Fatal Shore, and Waterproof, several of which were the recipients of awards from the Australian Association for Maritime History(AAMH). Grajagan is the most recent title in the series.

Mike Ritter began smuggling hash and marijuana in 1968 and continued for 18 years. After serving time at the Federal Prison Camp in Florence, Colorado in 2007 he enrolled in the University of Hawaii and graduated with a bachelor’s degree in astronomy, physics and mathematics. His book, Lifted, traces his life from a troubled adolescence, prison, and college to success, early retirement, and a new career as an author.  In 2013 he also co-wrote Thai Stick – Surfers, Scammers, and the Untold Story of the Marijuana Trade, with Peter Maguire.

Jack McCoy spent his early days in Los Angeles as the son of a radio and TV show host. He began surfing when the family moved to Hawaii in the 1950s and took up still photography after relocating to Australia in 1970. Teaming up with Dick Hoole, he then shifted to cinematography to produce his first surf movie, Tubular Swells, in 1976. Over the following four decades, he has established himself as one of the sport’s leading cinematographers and storytellers.

Since 2000, the Santa Barbara Maritime Museum has featured many artifacts and stories to share the history of the Santa Barbara Channel with more than 40,000 visitors annually and provides year-round experiential maritime history and marine science education for local youth. . Featuring the impressive First-Order Fresnel Lighthouse Lens from Point Conception, SBMM’s current exhibits explore the History of Oil in Santa Barbara Channel & Chumash Use of Asphaltum, the Honda Disaster, Wives and Daughters: Keepers of the Light, and Whales Are Superheroes!