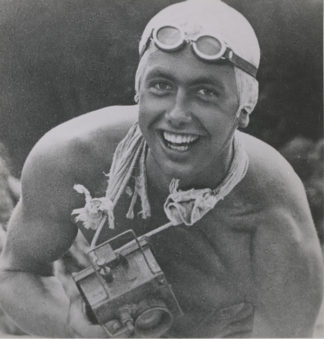 ****CANCELED****Hans Hass: The Man Who Discovered the Sea

Known by divers internationally as the Pioneer of the Pioneers, Hans Hass started his diving career in the 1930s. He was the first free-swimming film maker to film and photograph sharks, manta rays, and whales in their natural environment. A prolific writer, Hass had published six books on diving by 1950. He left the underwater world in 1960 and was largely forgotten by the diving industry. Hans met Santa Barbara-based diving historian Leslie Leaney in 1997 and they formed a partnership that led to a revival of interest in Hans’ pioneering career. In 1998 Leslie and Ed Stetson brought Hans and his wife Lotte to Santa Barbara for a film festival at the Arlington honoring his career. The film festival was used as the climax of the film The Man Who Discovered the Sea, but the film was never released in America. In this program Leslie will present the Santa Barbara residents and the background involved in the Arlington film festival and will show the complete movie.

Born in London, England, Leslie Leaney is a Founding Trustee of the Santa Barbara Maritime Museum (SBMM). He started diving in 1969 and progressed through the British Sub Aqua Club system, eventually becoming the Diving Officer for BSAC Special Branch in Singapore. During the 1970s he worked for the late King Hussein of Jordan, diving in the Red Sea and in the Maldives, Malaysia, New Zealand, Australia, England, Malta, Saudi Arabia and Oman.

In 1980 Leslie relocated to California and started to pursue his interest in diving history. In 1992 he co-founded the Historical Diving Society USA, and in 1993 he founded the Journal of Diving History. In 1997 he became the North American representative for Austrian pioneer divers Hans and Lotte Hass and later became the first Executive Director of the International Scuba Diving Hall of Fame.

Leslie’s research has appeared in several international publications and is referenced by numerous authors. He has worked as a consultant for The History Channel, B.B.C., Discovery Channel, National Geographic Society, American P.B.S., United States Navy and others.

In recognition of his services to diving history, Leslie has been inducted into The International Scuba Diving Hall of Fame, the Commercial Diving Hall of Fame, and the California Wreck Divers Hall of Fame. He has also been awarded the DEMA Reaching Out Award, Academy of Underwater Arts and Sciences NOGI Award for Education, the Beneath the Sea Diver of the Year Award for Service, Wyland Foundation ICON Award, Honorary Life Time memberships in the Historical Societies of Russia, Canada and South East Asia, Pacific. He is a Fellow of the Explorers Club, a Fellow of the Academy of Underwater Arts and Sciences and, by the nomination and sponsorship of Major C. Lambertsen, M.D., “The Father of American Combat Swimming,” a Lifetime Member of the U.D.T. Seal Association.