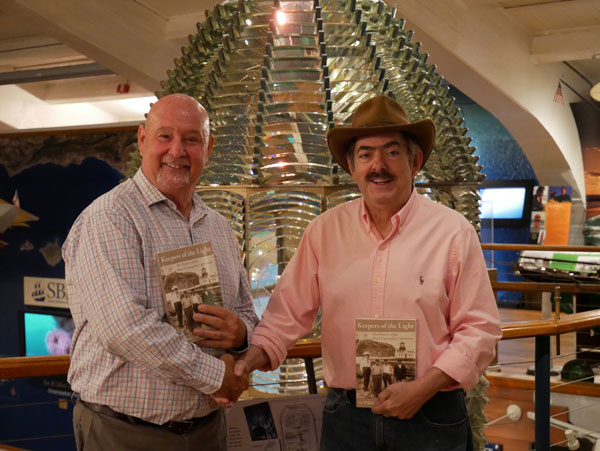 Keepers of the Light:

The History of the Point Conception Lighthouse Reading and discussion with local author, Willard Thompson

This as a family friendly event (kids welcome, Free event for SBMM Members) and there will be birthday cake for the Lens’ 164th Birthday.
Non-Members are Free from 1pm to 3pm for the reading and discussion.

Point Conception, considered sacred ground by the Chumash, is the headland where California’s coast goes from a north-south orientation to east-west, making a natural division between Southern and Northern California. Ever since the Gold Rush Days, the Point Conception Lighthouse has guarded the treacherous Pacific waters where the Santa Barbara Channel and Pacific Ocean meet on the western edge of Santa Barbara County. Such a dangerous place for mariners, Point Conception was dubbed The Cape Horn of California.

The Santa Barbara Maritime Museum, current home of the giant First Order Fresnel lens from the Point Conception Lighthouse, will celebrate the 164th anniversary of the lighthouse’s first lighting on February 1, 1856. An afternoon reading and discussion of the lighthouse and its lens will be followed by a special birthday cake. The event is free and open to the public and families are welcome. Parents are encouraged to bring their children to learn the history of the lighthouse and the men and women who braved the rugged terrain, heavy fog, and strong winds of Point Conception to keep mariners safe.

Award-winning historical fiction author, lecturer and historian, Willard Thompson will lead the event and read from his book, Keepers of the Light: The History of the Point Conception Lighthouse. “For me,” Thompson says, “writing history and historical novels is not just about telling stories in historical time settings; it’s about bringing to life the people who lived, loved, and strove for meaning in their lives during those historical times. I hope we will have a good turnout of parents bringing their kids to learn about this aspect of our local history.”

In 2019, Thompson donated all rights to his book and proceeds from its sales to SBMM.