She is the Ocean features the Stories of Nine Extraordinary Women from Across the Globe Who Define the Courage and Spirituality it Takes to Call the Vast Ocean Their Home that will appeal to surf enthusiasts around the world! 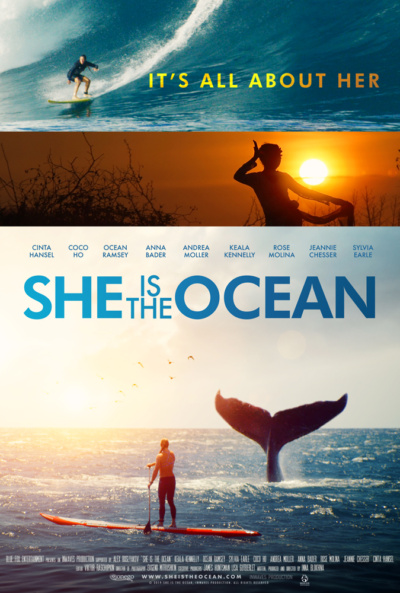 The Santa Barbara Maritime Museum is proud to announce the Santa Barbara premiere of SHE IS THE OCEAN from Inna Blokhina, acclaimed director of the award-winning documentary On the Wave.  SHE IS THE OCEAN follows nine women from across the globe and across all ages, who all share a deep and profound love of the ocean. In this unique documentary concept, Blokhina has selected these women, ranging from the ages of twelve to eighty-three, to create a portrait of what could be a metaphor for one woman’s ocean life through all her ages.

According to James Huntsman, owner of Blue Fox Entertainment which is releasing the film,“ We are proud to work with Inna Blokhina bringing these amazing and touching stories to audiences around the world and we believe the Santa Barbara Maritime Museum is the ideal partner to present this inspirational film to the Santa Barbara community.”

Said director Inna Blokhina, “In creating this film, I found that there is an incredibly unique story behind every woman. And every woman deserves to be heard. For almost 6 years I have been collecting stories of 9 amazing women to capture their incredible willpower and ability to follow their dreams no matter what. They taught me to dream big, believe in my dreams, and to follow your heart, follow your feelings… And now I would like to share this fabulous experience with audiences everywhere.

Shot in stunning 4k cinematography, the film captures these ocean stories in a spectacularly immersive way, bringing to life every ocean encounter in breathtaking fashion – from free-swimming with sharks far below the surface, to the top of the world’s biggest waves.  A journey of both natural beauty and human empathy, SHE IS THE OCEAN is the story of powerful women with depths unknown.

Tickets are $10.  A portion of the proceeds benefits the Santa Barbara Maritime Museum.

ABOUT THE SANTA BARBARA MARITIME MUSEUM

Since 2000, the Santa Barbara Maritime Museum has featured many artifacts and stories to share the history of the Santa Barbara Channel with more than 40,000 visitors annually and provides year-round experiential maritime history and marine science education for local youth. Featuring the impressive First-Order Fresnel Lighthouse Lens from Point Conception, some of SBMM’s other exhibits include the History of Oil in Santa Barbara Channel & Chumash Use of Asphaltum, the Honda Disaster, Wives and Daughters: Keepers of the Light, and Mermaids: Visualizing the Myths and Legends through Photography. With the advent of the COVID virus, the Museum has also made many of its lectures, programs, and activities available in an online format through its SBMM at Home webpage SBMM is located at the historic Santa Barbara Harbor at 113 Harbor Way, Suite 190, Santa Barbara, CA 93109.  Visit sbmm.org or call (805) 962-8404 for details.