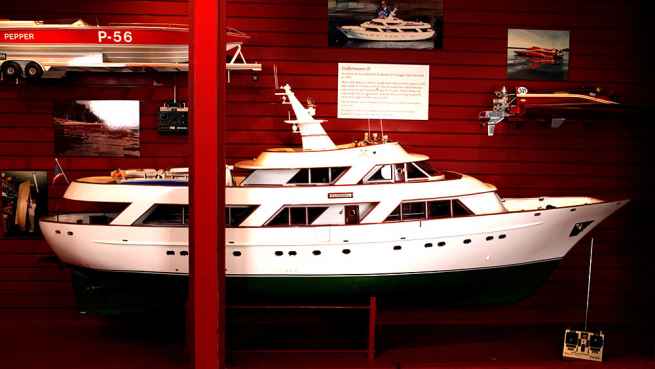 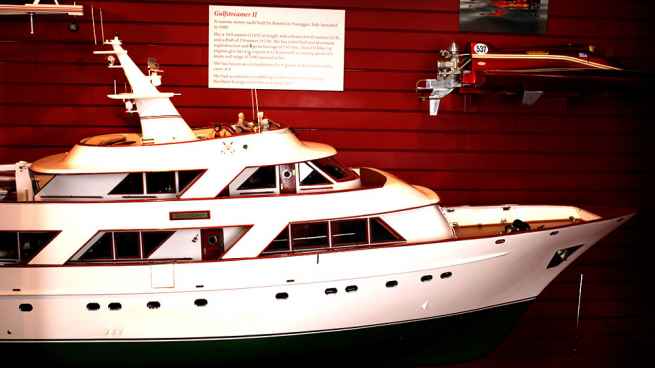 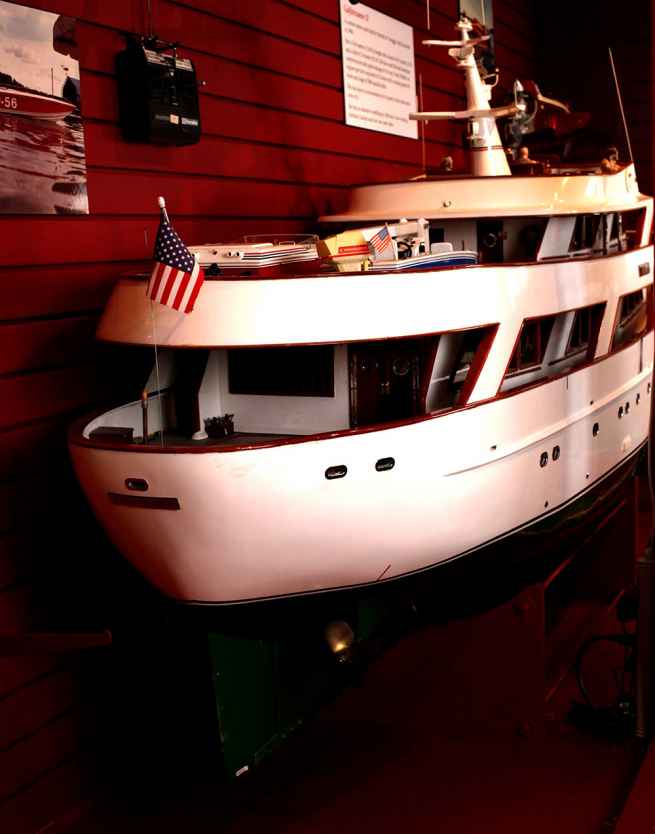 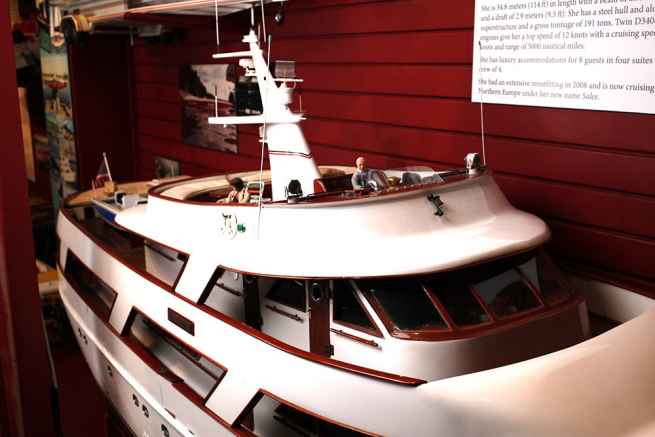 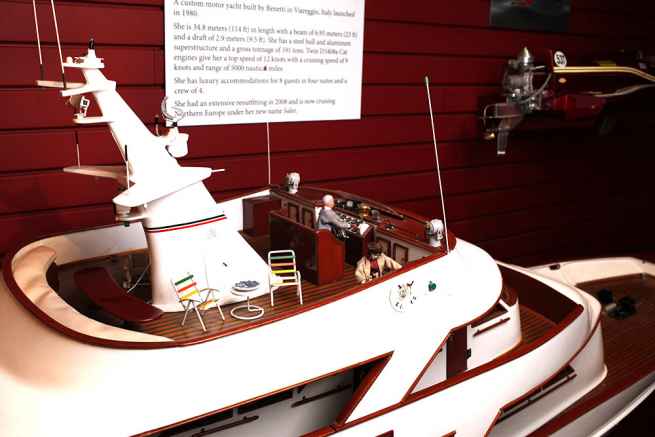 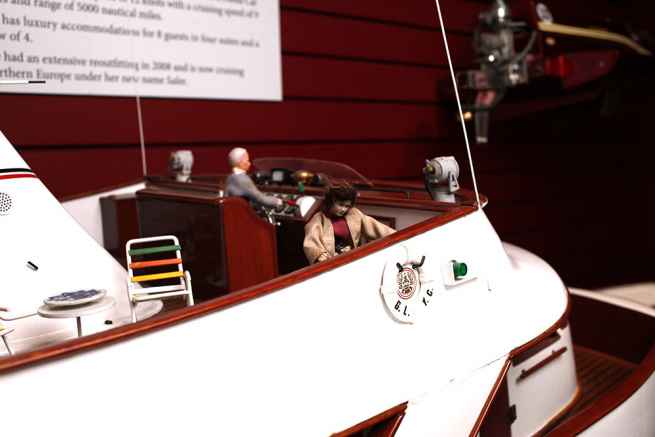 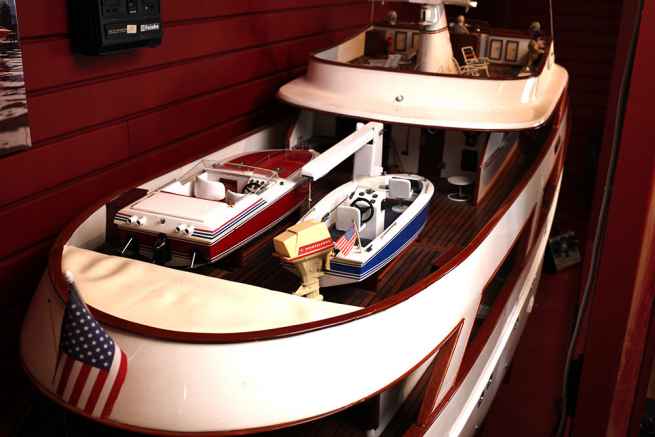 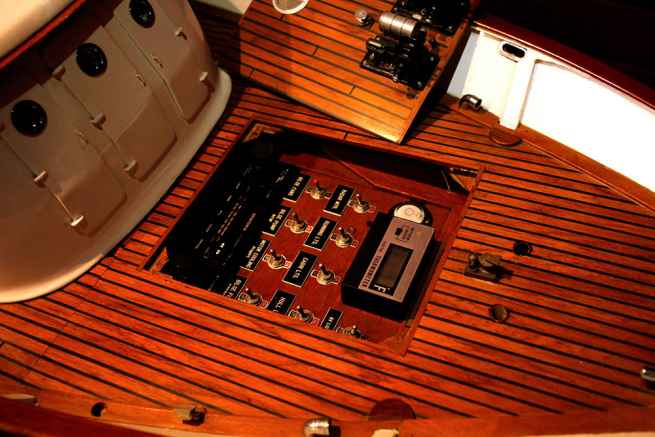 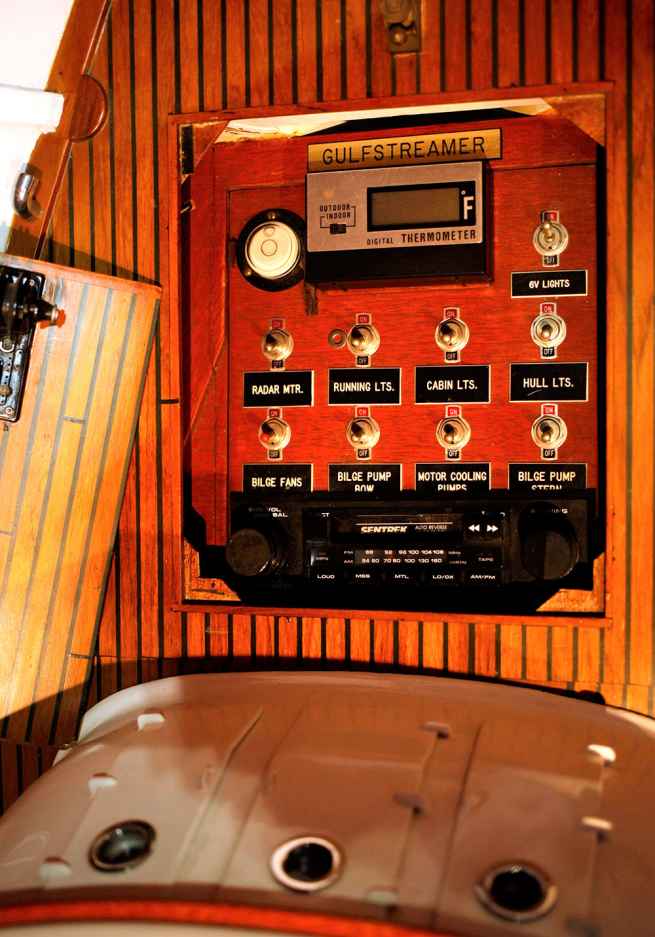 Radio controlled model of a custom luxury motor yacht. The model was built from the plans for the original yacht and hundreds of photographs of the interiors. There is a very high level of detail including 215 operating light fixtures. Constructon took over 3000 hours over three years. Gulfstreamer is built using plank on frame construction with birch plywood keel and bulkheads and balsa planking. The hull is covered inside and out with fiberglass cloth set in resin. The aft section is molded foam covered with fiberglass in resin. Decks are 1/8 inch teak on 1/8 inch aircraft plywood. Painted surfaces are finished with Dietzler Acrylic, teak and mahogany surfaces are finished with varnish. Power is provided by two aircraft flap actuator motors modified for water cooling directly driving 4 inch propellors. There are four bilge pumps. Large automotive batteries (12v and 6v) provide 18v power for the motors through a Futaba speed control. Separate batteries provide power for lighting, audio and the radio controls. The radio
Online Pharmacy Usa, Discount Drug Store Online zoloft for sale no prescription online pharmacy no rx, buy zoloft onlne no prescription canadian discount pharmacy
system is Futaba. Featured in the February/March 1992 issue of "Scale Ship Modeler"
Gulfstreamer II is a custom luxury motor yacht built by Benetti in Viareggio, Italy for Al Paulson, owner of Gulfstream Aircraft, launched in 1980. In September of 1986 Dwight saw Gulfstreamer for the first time as it entered Marina Del Ray where he was working on his own yacht and decided to build a model of it. Paulson was an old friend and with his permission Dwight photographed the yacht interiors and acquired the original plans from Benetti. The model which took over 3000 hours to complete is very finely detailed including 215 working light fixtures. All of the furnishings were modeled from the pictures. The model was completed in June 1991 and was featured in the February/March 1992 issue of Scale Ship Modeler.
Previous Item
Funding support for the virtual exhibit was provided by the City of Santa Barbara's Organizational Development Grant Program.
© 2021 Santa Barbara Maritime Museum. All Rights Reserved.
NAVIGATION