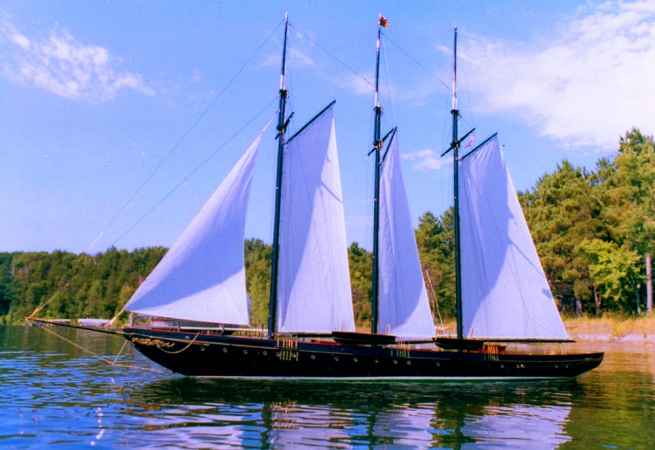 Radio controlled full sailing model of the yacht Atlantic which set the record for an Atlantic crossing in 1903 winning the Kaiser's Cup. It's record has never been broken. The model has radio control of all seven sails. Atlantic is built using plank on frame construction with mahogany plywood keel and bulkheads and balsa planking. The hull is covered inside and out with fiberglass cloth set in epoxy. She carries 80 pounds of lead shot ballast epoxied in place. The radio control is a Kraft KPS-15. Sail control for all 7 sails is through a Vortex SC-3 sail control, sail control hardware is also Vortex. Auxiliary power is supplied by a 12v motor originally designed as a aircraft flap control. There are two 12v bilge pumps.
Atlantic was built in New York in 1903 and was considered one of the most beautiful of the great yachts with her black hull, low freeboard, sweeping sheer and presence at 185 feet LOA and 18,600 square feet of sail. In 1905 she won the Kaisers Cup race from New Jersey to the English Channel setting a record for an Atlantic crossing that has not been broken by a displacement monohull sailboat. Dwight began construction of his ten foot radio controlled model in November of 1978. She has fully detailed interiors in the staterooms, galley, salons, crew quarters and bathrooms and has full interior and exterior lighting. The model appeared in the Winter 1979 issue of Scale Ship Modeler and the April 1980 issue of R/C Model Builder.
Previous Item
Next Item
Funding support for the virtual exhibit was provided by the City of Santa Barbara's Organizational Development Grant Program.
© 2021 Santa Barbara Maritime Museum. All Rights Reserved.
NAVIGATION