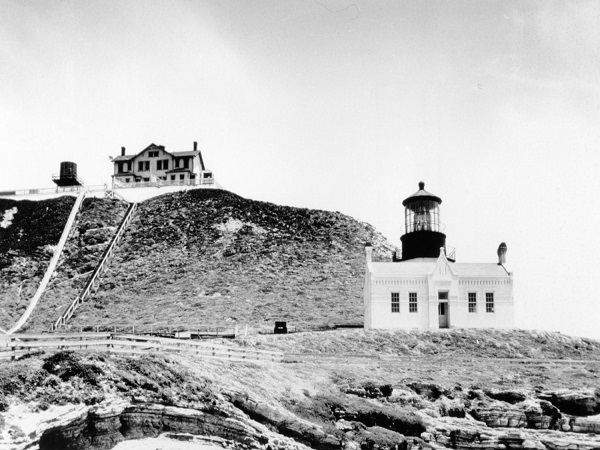 Point Conception, considered sacred ground by the Chumash, is the headland where California’s coast goes from a north-south orientation to east-west, making a natural division between Southern and Northern California. Ever since it was first lit on February 1, 1856, the Point Conception Lighthouse has guarded the treacherous Pacific waters where the Santa Barbara Channel and Pacific Ocean meet on the western edge of Santa Barbara County. Such a dangerous place for mariners, Point Conception was dubbed The Cape Horn of California.

Join us on January 21, 2021 to hear SBMM Executive Director Greg Gorga talk about the unique importance of California’s Point Conception Lighthouse and the original 165-year-old First Order Fresnel Lens that now resides at the Santa Barbara Maritime Museum. Learn about the history of Fresnel technology, the lives of the keepers who lived in this desolate location and hear a first-hand account of all that was involved in relocating the 18 foot tall, 6,000-pound lens from Pt. Conception to SBMM in 2013. Find out about “lampists,” the work required to reinforce the Waterfront Building, the stages of the lens travel—from crane to helicopter to truck—and the cleaning and reassembly of the lens to its current appearance. Gorga’s presentation will also include mention of Julia Williams and the Santa Barbara Lighthouse. https://mvppediatric.com/clomid-for-sale/

Greg Gorga, Executive Director, joined the Santa Barbara Maritime Museum in February 2007 as Director of Development, and has served as the Executive Director since May 2008. Gorga has a B.A. in English from Rutgers University. He has more than eighteen years of experience working with nonprofit agencies, including Manager of Planning & Development for the Community Action Commission. Gorga is the immediate Past President of the Council of American Maritime Museums, formerly served as Chair of the City of Santa Barbara Community Development & Human Services Committee, and currently serves on the Board of Visit Santa Barbara. https://mvppediatric.com/over-the-counter-valtrex/