Ernest Brooks II, one of America’s true pioneering underwater photographers, and Historical Diving Society USA (HDS) Advisory Board members, passed away from heart failure on November 17, 2020. He was 85.

Known throughout the international diving industry simply as “Ernie,” his career accomplishments and contributions encompassed underwater photography, education, environmental advocacy, mentorship, philanthropy, ocean conservation, all of which were combined in his role as an ambassador for the oceans.

His diving career took him under the polar ice caps, and into every ocean. His brilliant photography was exhibited at the Metropolitan Museum of Art, the Museum of Man, the National Maritime Museum, the Smithsonian, and numerous other international museums and galleries.

Ernie’s love of photography came from his mother, his uncle, and his grandmother, who emigrated to America from the Azores. All three were professional photographers. His father, Ernest Brooks, Sr. loved both photography and the sea, and founded Brooks Institute of Photography in Santa Barbara in 1945 and started its underwater photography department in 1956. Reflecting on the origins of his career, Ernie noted, “I was destined to spend my life doing what was meant to be.”

He recently recalled that his first steps in a career that spanned seven decades were taken at an early age:

“I loved swimming underwater! I entered the three-mile swim off  Santa Barbara and won three years in a row. But in the fourth year when I was a senior in high school I looked down and I saw the kelp we were swimming through. Light rays were going through and I could see the fish on the bottom. And I stopped swimming and saw the beautiful ocean. I lost the race.”

He started diving in 1949, making his first underwater camera housing from aluminum, but the early beginnings of his professional photographic career would take him up, not down.

At 18 years of age, during the tensions of the Cold War, he started a tour of duty with the USAF, flying in the high altitude U2 spy plane. “I was very good at figuring out optics. We were using a lot of infrared cameras, and actually I designed the film,” he recalled. By the age of 20 he had flown over 70 different countries.

Ernie left the Air Force at age 22 and immediately worked with Captain Jacques-Yves Cousteau, training a group of divers who were the photographic team aboard Cousteau’s research vessel, Calypso. Ernie stayed involved with Cousteau for 17 years, while at the same time working with his father at the Brooks Institute of Photography, from which he graduated in 1962.

His graduation coincided with the start of deep water commercial mixed gas diving that was driven by off-shore oil exploration off the Santa Barbara coast. At that time, saturation diving was also becoming well established.

He recalled, “By this time I was well into my fascination with man’s triumph in the sea, and photography came into its own on a parallel course.  As a civilian member of the U.S. Navy SEALAB program, living at 200 feet for 12 days was more than life rewarding. It was there, watching “Tuffy the Porpoise” deliver the daily mail, that my deepening interest in marine life and its intelligence came into focus.”

In 1971, Ernie became the Brooks Institute’s President, elevating the institution to a four-year, university-level school. He introduced audio-visual, undersea technology, physics, and optics componentry programs, and added corresponding graduate degrees. He also continued to develop the underwater photography curriculum at the Institute. His boat, Just Love, acted as a floating studio and darkroom, as it plied the Santa Barbara Channel Islands, rewarding both students and masters with images that would define their careers.

When not attending to his executive responsibilities or teaching at the Institute, Ernie lectured at various annual diving and photography shows. He also acted as project leader, or principal member, in numerous international photographic research projects, including his 1978 photographic investigations that were part of the Shroud of Turin Research Project.

The Brooks Institute was sold in 1992, and freedom from a day job allowed Ernie to embark on a life full of extensive international travels and adventures.

In 2002, working with his former students at Media 27 in Santa Barbara, he published the book Silver Seas: A Retrospective, which was supported by a turn-key traveling exhibit of his photographs. Featuring images from his years photographing marine life around the Channel Islands, the book set an unsurpassed standard for black and white photography.

Famed National Geographic underwater photographer David Doubilet, his former student, stated, “Brooks is truly the ‘Master of Light in the Sea’. The rich black and white images in Silver Seas are simply the most beautifully reproduced photographs ever made in the oceans – a rare composition of art and craftsmanship.” 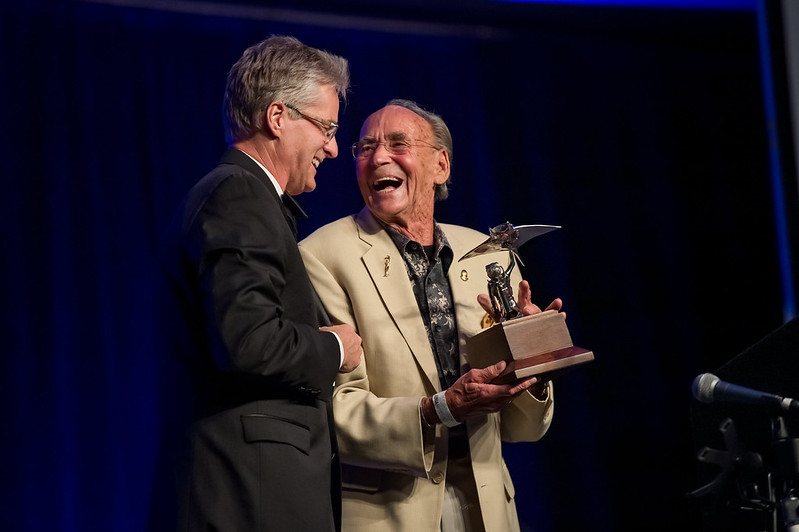 Ernie’s career was recognized by Ukrainian sculptor Viktor, who created a statue of Ernie as part of his Legends of the Sea series. The granite statue, which depicted Ernie with an underwater camera housing, was unveiled at a fund raising event for the HDS at the Santa Barbara Maritime Museum in 2011, and later displayed at Google’s Mountain View headquarters.

In 2013, his inspirational work gained broader recognition when it was paired with that of Ansel Adams, and Dorothy Kerper Monnelly, in the travelling exhibition Fragile Waters. The exhibition called attention to the critical resource of water, in all its beauty and power, and premiered at The National Maritime Museum, before touring the USA.

Ernie gained further international recognition and acclaim when the world’s oldest watch company, Blancpain of Switzerland, began to use his underwater images in their promotional campaigns. He also began to receive, and for the most part accepted, invitations to be either a keynote speaker or guest of honor at large international conferences in China and Asia.

In 2013, the Santa Barbara Underwater Film Festival and the Historical Diving Society USA organized a Tribute Festival to Ernie, in recognition of his pioneering career accomplishments. Among the many presenters were Ernie’s former students and also living legends of underwater film and photography. Attendees came from Germany, Singapore, France, Australia and all across the USA. Ernie recently told organizer Ed Stetson that the tribute was one of the highlights of his career. Anyone who attended it will never forget it.

His career was recognized by an array of awards from both the diving and photography industries, including the Academy of Underwater Arts & Sciences NOGI Award, the Diving Equipment & Marketing Association Reaching Out Award, New York’s Beneath The Sea Legend of the Sea Award, and induction into The International Scuba Diving Hall of Fame in Grand Cayman.

Ernie traveled to Germany in 2003 to become the recipient of the Historical Diving Society’s inaugural Hans Hass Fifty Fathoms Award, which he received in person from his hero, Professor Hans Hass.

Ernie touched the lives of countless people and influenced multiple organizations through his educational skills, philanthropy, and investments in many individuals. The Historical Diving Society USA is just one of those many organizations, and I am just one of those many people. Ernie’s philanthropy allowed me to establish the Leaney – Brooks Diving History Archive at UCSB, thus providing an ongoing research library for the study of diving history that will outlive us both.

His recent donation of the former Brooks Institute campus on the Riviera, to Santa Barbara Middle School, reached new heights of local philanthropy. I was told by a knowledgeable source that the value of the property was in the range of eight to twelve million dollars.

Ernie understood the Gift of Giving, and made our divers’ community a better place. He was a living example of the famous quote, “We make a living by what we get, but we make a life by what we give.” And the range of Ernie’s full life—from flying at secret altitudes in a U2, to diving the depths of the Channel Islands and the world’s oceans— mirrored the full range of his generous giving.

As a roving international ambassador for the oceans, Ernie also became ambassador for not only Santa Barbara but also the HDS, DEMA, WDHoF, and AUAS. He was a truly unique and generous man, and our whole industry has benefited from the time he shared with us.

His legacy includes his spectacular retrospective book Silver Seas, whose images greet divers boarding any of the vessels of HDS sponsor company Nautilus Liveaboards. His body of work is displayed in museums and galleries around the globe, and stands to remind us of his career talent. Also contained in his legacy are the numerous community-service and educational non-profit organizations, whose future was secured by his philanthropy and vision.

Ernie’s spirit lives on and guides The Ernest Brooks Foundation, a non-profit organization whose mission remains “to support and enrich the knowledge and education of those who shape our understanding of the world through photography and the creation of visual media.”

Ernie will live on in the hearts of those who were fortunate enough to have known him or to be forever influenced by him. These include an impressive array of A-List underwater photographers whom he taught and mentored. Their on-going visual contributions to our understanding of our Blue Planet ensures Ernie’s influence will live on.