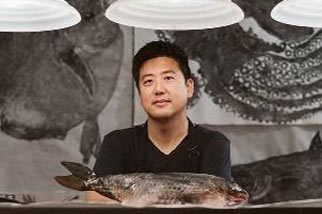 The Santa Barbara Maritime Museum is delighted to announce that Dwight Hwang will be demonstrating the art of nature printing with commentary by Emily Miller, to coincide with the museum’s art exhibit, Fishing with Paper & Ink.

The objective of nature printing is to express the essence of nature through the medium of paper or cloth and ink. The simple elegance of common subjects is preferred. Whether leaf, shell, crab or fish, each plant or animal has its own unique texture, shape, and energy. By isolating the subject in the negative space on a sheet of paper this signature can be identified. The results are Zen-like renderings that praise the diversity and beauty of nature. Gyotaku is a traditional Japanese method of nature printing that uses fishes, sea creatures, or similar subjects as ‘printing plates’ in its process.

Dwight Hwang’s first exposure to Japanese gyotaku occurred at a tackle shop in Tokyo where the walls were covered with fish prints. His realization that a fish was not only the subject, but the tool by which art is created, led him to more adeptly manipulate the fish into naturalistic positions.

In tandem with his wife Hazel, Dwight continuously strives to fine tune their process while they restrict themselves by using only the original materials of this age-old tradition—sumi and washi. Displaying an aptitude towards conveying subjects at different perspectives and angles, it is their wish to instill an undeniable sense of life and motion to these underwater creatures which they hope will inspire and awe those that look upon them. His work has been shown in the United States, France, and Monaco; and his work has been published in several books. His first major solo exhibition, Impressions of the Sea: Gyotaku Fish Prints, was held at the Japan Foundation, Los Angeles: and he is currently working on projects with the National Oceanic and Atmospheric Administration (NOAA) and the outdoor lifestyle brand, Patagonia.

“My many years in Japan have taught me some very important things. However, one that stands out, and remains to sculpt how I view the Japanese approach to life and artistry, is the cultural love and admiration for simplicity, fleeting moments and the ‘Perfect Imperfection.’  To take a flawed subject and emphasize it to the point of it becoming beautiful.”

Emily Miller first experimented with gyotaku in 2016, on the island of Kodiak, Alaska.  Although distinctly different from feudal Japan, where gyotaku originated, Kodiak is also populated with fisherpeople who are sustained and inspired by their ocean harvests.  As a federal fisheries observer, Emily saw the relevance for gyotaku in today’s world, which is increasingly concerned with sustainable, local sources of seafood.  She began an apprenticeship with Dwight and Hazel with the objective of facilitating communication between fishermen, scientists, and the general public at the cross section of their interests – fascination with the sea.  The resulting conversation, she hopes, “will help unite newly merging spheres of biology, art, ethics, and economics.”