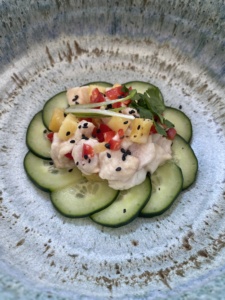 Instructions
Juice the limes. Clean, pat dry, and small dice the rockfish fillets. Combine fish and lime into a large glass bowl. Leave to chill and “cook” in the lime juice in the fridge for 30-40 minutes, stirring once halfway through.

Grate fresh ginger and combine with coconut milk in a jar. Cover and leave in the fridge until ready to use.

When the fish has been in the lime juice long enough, remove excess liquid by gently and slowly pouring it out. There will be some left behind, this is fine.

Add the ginger coconut milk mixture to the fish. Stir well. The coconut milk halts the “cooking” of the lime. This can be done 5 minutes before serving or up to a couple hours beforehand.

Lay down ¼ of the cucumber in a circle and spoon the rockfish mixture out onto the cucumber.

Serve as an appetizer with bread (perfect for grabbing the excess coconut milk!)

Where was the seafood purchased or caught? I purchased rockfish from Paul Teall at the Saturday morning Fisherman’s Market at the harbor pier.

Why did you select this particular seafood for your recipe? Seafood has played an important role in significant moments throughout my life. For France it’s langoustine, for French Polynesia it’s tuna, and for Santa Barbara it’s rockfish. In all these places the seafood was always caught and purchased locally from the fisher-person directly, which I believe creates an invisible connection with the people and the cultural identity of the place. I chose to build a recipe around rockfish because it’s a reminder of my love and connection with Santa Barbara.

How was your seafood raised or caught and what makes it sustainable? The mixed-species rockfish fishery is managed with a monthly fishermen quota and is generally caught by hook and line or trap-based fishing. While this fishery faced historic declines, the last decade has seen a phenomenal rebound, and the fishery is doing very well now.