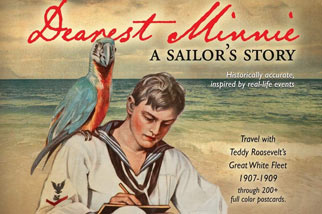 Hoping to enforce treaties and protect overseas holdings, President Theodore Roosevelt and Congress set out to build American naval power. Beginning in the 1880s with just 90 small and mostly obsolete ships, the navy quickly grew to include new steel fighting vessels. The hulls of these battleships were painted a stark white, which earned them the nickname, the Great White Fleet. By order of President Theodore Roosevelt, 16  battleships  and their various escort vessels sailed around the world between December 16, 1907, to February 22, 1909, visiting numerous countries and stopping in Santa Barbara on April 28 1908.

Dearest Minnie, chronicles not only the cruise itself, but the social and political elements in each port where the ships re-coaled.  The story is told through over 200 picture postcards and letters sent from a sailor on the USS Virginia to his sweetheart, eventually leading to his proposal of marriage. In Leslie Compton’s presentation, the audience will learn about the history and development of picture postcards, the reason for the cruise around the world, the political climate at the time, the animals aboard the ships, and some of the unexpected mishaps, while focusing on their visit to Southern California.

Leslie Compton began writing Dearest Minnie twenty years ago after discovering a large section of her postcard collection originated from a sailor on the USS Virginia while sailing with Teddy Roosevelt’s Atlantic Fleet around the world in 1907-1909.  She spent years researching, visiting libraries and museums, and meeting like minds to create a strong narrative-driven historical fiction bringing to light a typical sailor’s life during this historical event. Most of Leslie’s adult life was spent as a professional musician, teaching elementary school, childbirth education and non-fiction writing.  Leslie moved to Southern Oregon in 2001 where she enjoys writing, teaching and attending classes in Ashland and Medford through SOU, and is currently working on her fourth book. Leslie can be contacted at: www.Lesliecompton.com.

Since 2000, the Santa Barbara Maritime Museum has featured many artifacts and stories to share the history of the Santa Barbara Channel with more than 40,000 visitors annually and provides year-round experiential maritime history and marine science education for local youth. Featuring the impressive First-Order Fresnel Lighthouse Lens from Point Conception, SBMM’s current exhibits explore Geology of Oil in Santa Barbara Channel & Chumash Use of Asphaltum, the Honda Disaster, and Wives and Daughters: Keepers of the Light.