Greg Gorga, our Executive Director, had the opportunity to speak with Dr. Chris Lowe before the September 17th lecture. 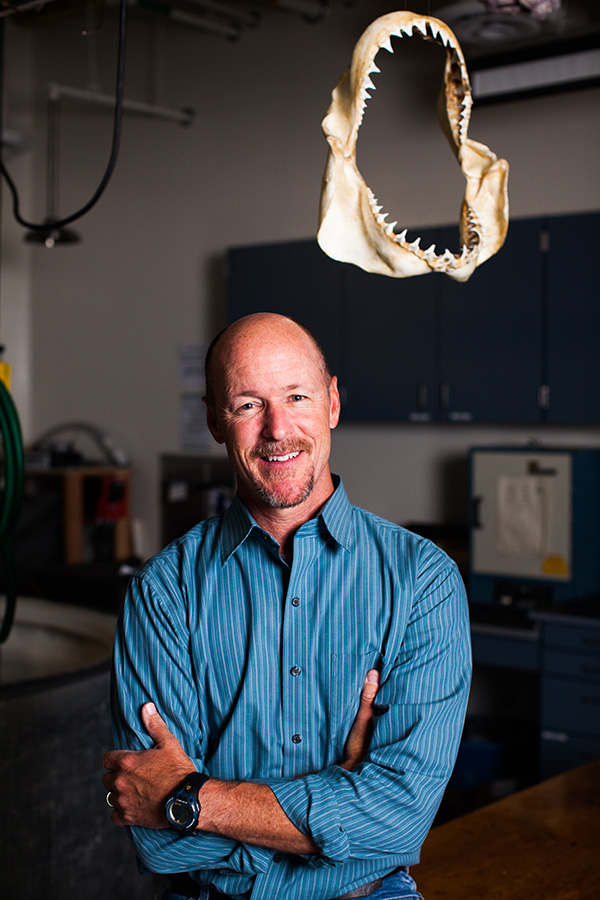 What drew you to study sharks?
I grew up on Martha’s Vineyard, so there wasn’t much to do there except go fishing, diving, or be out on the water. I remember the first time I touched a dogfish, and I was so intrigued I went to the library to learn more about that fish. Eventually I started studying sharks. My mother’s family has been on that island for 200 years, they were whalers and fishermen.

It is interesting that the CSU-Long Beach Shark Lab began in 1966. Can you tell me a little bit about that history? Acoustic telemetry (used to track sharks) must have been cutting edge technology in those days.
Dr. Don Nelson started Shark Lab. At the time he was considered a world expert in shark behavior. He was also a champion spearfisherman. He realized that diving was not a great way to study sharks. You couldn’t see enough as a diver, and you were disturbing their environment. He became one of the first scientists to utilize acoustic telemetry (the use of transmitters and receivers to gather information about fish movements). Back then we had to build our own transmitters. And they were so big and clunky, you could only use them on larger marine life like sharks.

What has the development of ROVs (remotely operated vehicles) and AUVs (autonomous underwater vehicle) allowed you to do?
Sharks are very stealthy, they are elusive, and they can travel to a wide range of areas. We didn’t know what influenced their behaviors, and we needed new tools to gather more information. AVs (autonomous vehicles) have additional sensors, they can create hi res environmental maps, that provides a large amount of data, and from that we better understand why they make certain decisions, such as what water conditions they prefer. AVs, like aerial and underwater drones, also provide a visual mosaic, they allow us to spy on sharks, gather more data, and learn what makes them tick.

What is the most unusual behavior you have discovered in these sharks?
We are learning new things all the time. At one time we placed smart tags on three sharks. These tags are like a Fitbit, they provide a range of 3D data, a video log of the shark’s behavior. You are seeing what the shark sees. We observed two of the sharks swimming in a circle for 20 minutes. Then they would swim in the opposite direction for 20 minutes. They went back and forth like that for four hours. One of my students read about a similar behavior in birds. When they migrate over long distances, the sometimes fly in circles for periods of time. They are shutting off half of their brain, allowing that half to sleep. Since sharks would suffocate if they stopped swimming, perhaps this is how they sleep.

What would you most like to learn or observe next about these sharks?
We want to predict when and where they will appear. We know that during the summer months they like to show up at beaches. Why do they appear at specific beaches, at specific times? If we can predict where these nurseries of sharks will be, and when, it will have safety and economic benefits.

Would you go swimming or surfing off our local beaches?
Of course, I just did!