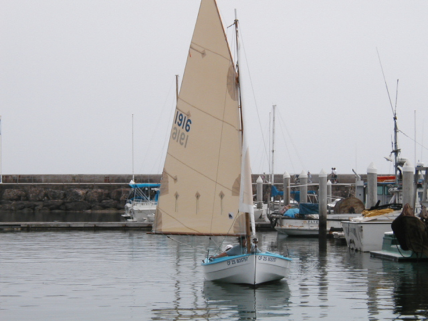 Every sailor remembers the boat they learned to sail in.  For many it was in a fleet of training boats in a yacht club or civic organization.  Our Sea Mew is the descendant of one of these boats.

Our story begins in 1916 with the November issue of The Rudder magazine in which the editors fulfilled a promise to publish a set of plans for a “one-design class for the younger generation.”  They chose the Sea Mew designed by Fred W. Goeller, about which Fred wrote in the same issue:

“The Sea Mew has been designed primarily for what may be called the kindergarten class. On the Great South Bay, on Jamaica Bay, on Long Island Sound, and on other pieces of water there are many boys and girls under 14 years of age who are anxious to learn to sail, but whose parents are often timid about allowing the youngsters to go on the water without some experienced man being with them.

“To keep the sport of yacht sailing alive it is absolutely necessary that the boys become interested and the earlier they learn to sail the more confidence they will gain, and they will acquire the niceties of boat handling so that in later years they will be much more skillful than one who waited until late in life before taking up the sport.  The Sea Mew is an absolutely safe boat.  It can be rigged as a catboat or as a sloop.  Some prefer the sloop rig, but the best sailors are those who graduated from the catboat class.

“Several parents who form the Summer colony at Bellport have agreed to build boats from these plans for their boys.  They will be ready for next season.  It is very probable, too, that a similar class will be built for the boys or girls on Moriches Bay.  Commodore Effingham Wilson, of Jamaica Bay Y.C., is interested in the class and is trying to induce members of his club to build. The plans have been generally commended by those who have seen them and they are printed in The Rudder because it is thought that members of other clubs will be interested.

“One of the main features of these boats, aside from their safety, is their cheapness.  It has been found absolutely necessary in promoting small one design classes to have them as inexpensive as possible, consistent with good workmanship.” 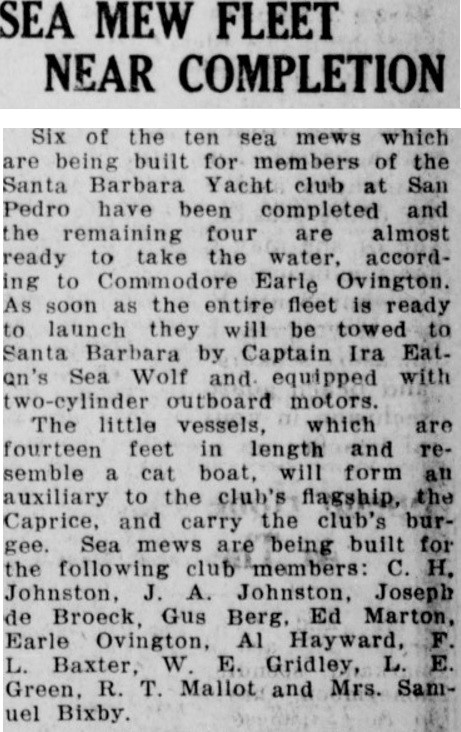 Shortly after the plans were published in The Rudder the Long Beach Sailing Club, with the sponsorship of the local recreation department, had a small fleet built for its instructional program.  Soon, other fleets sprang up in San Diego, Newport, and Santa Barbara.  Many of the early Sea Mews were built by the Fellows and Stewart Boatyard, which also built the Santa Barbara Maritime Museum’s Ranger.  They were towed north to Santa Barbara in strings of four or five by Santa Barbara fishing boats that had offloaded their catches in San Pedro.  Many went to the Santa Barbara Yacht Club for its junior sailing program, others to individual owners.

Sea Mew one-design racing started to fall off in the 1930’s as owners began to experiment with different rigs, keels and ballast.  One of the early adaptations was to cast cement blocks between the frames for added ballast.  Others went to boilerplate fin keels in place of the centerboards or fitted a shoe keel.  Fred Goeller himself published a design with bowsprit extended to 6 feet and carrying 260 square feet of sail, 75 square feet more than his initial design.

Most of the Santa Barbara Sea Mews came from Los Angeles, but there were some local builders as well: the Lindwall Boatyard, Harry Davis, and John Hooper. Harry deserves most of the credit for the continued attention to the design in California.  In 1965 he took his last wooden hull, the Lark, used it as a plug for a fiberglass mold and began turning out several fiberglass boats a year for customers up and down the coast.  SBMM’s Sea Mew, David T. Nidever, is probably one of these boats. They were all gaff sloops with a three-foot bowsprit, 12-foot main boom, 22-foot solid spruce mast and a hollow box keel containing some 300 pounds of lead.  Since the fiberglass hull is lighter than wood, the lead keel brought these to similar weight with better stability.

Another Santa Barbara Sea Mew booster was Ed Lewis. He acquired one as a youth, added a boilerplate fin keel and cuddy cabin, and cruised her along the coast as far as San Francisco. He recounted that she was incredibly seaworthy, handily weathering blows in the Santa Barbara Channel when the only craft out there were his little La Tortuga and the Coast Guard.

When Mark Miller, an author for Small Boat Journal, was photographing an owner-built Sea Mew in preparation for a story for the September 1982 issue, an older man came along and stood next to him.  He looked at the boat and exclaimed, “Why, I learned to sail on a boat like that back on Cape Cod Bay when I was a boy.” A recollection of a 50-year-old experience; you never forget your first boat.