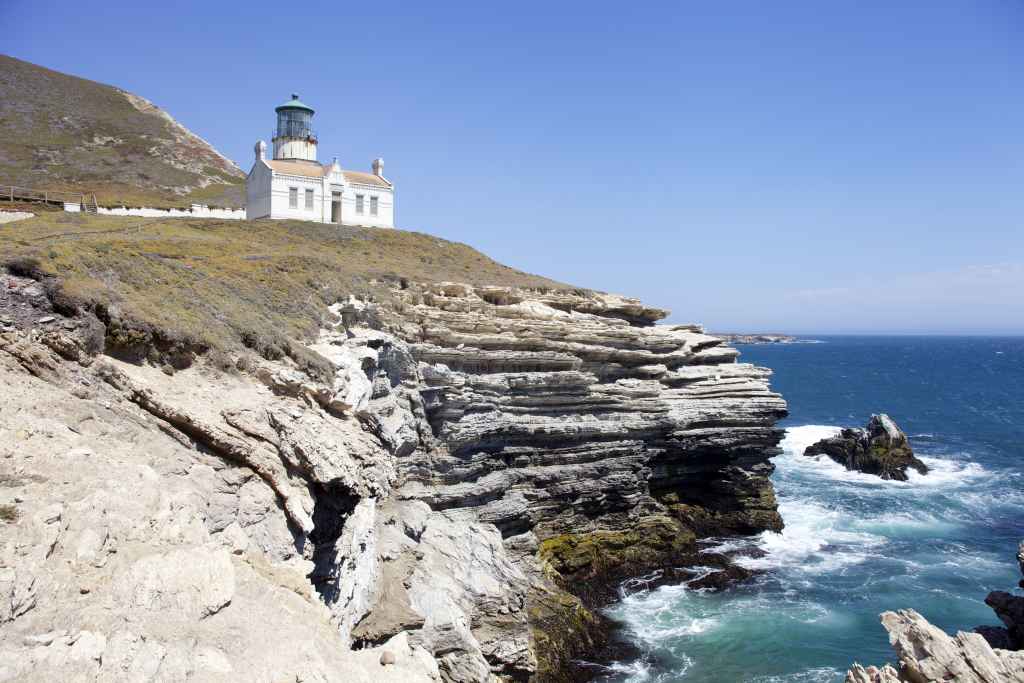 On October 18, 1542, as Spanish explorer Juan Rodriguez Cabrillo explored the California coast, he encountered heavy winds off Point Conception and was forced to turn back to San Miguel Island, where he died in December. His second-in-command, Bartolomé Ferrer, took charge and again tried to round the Point; but he was also unsuccessful.

Pt. Conception is a headland along the coast of southwestern Santa Barbara County. It is the point on the coast where the warmer waters of the Santa Barbara Channel meet the Pacific Ocean, and it forms the corner between the mostly north-south portion of the coast to the north and the east-west part of the coast near Santa Barbara. It is also a place where strong currents converge, cause dangerous turbulence in a rocky area, and make sailing so hazardous that it has been called the Cape Horn of the Pacific and the Graveyard of the Pacific. Because of the dangerous weather, wind, and water conditions, which resulted in hundreds of shipwrecks, Pt. Conception was selected in 1852 as the site of one of the first seven lighthouses to be built in California.

When the schooner General Pierce sailed into Cojo Bay in September 1855, carrying a First Order Fresnel lens for the new Pt. Conception Lighthouse, it delivered one of the major scientific and technological advancements of the 19th Century. Invented by French Physicist Augustin-Jean Fresnel and built in Paris in 1854, the lens used glass prisms, cutting edge technology for its day, to project a beam 25 miles into the most perilous waters of the California Coast from 1856 until 1999.

There are many things that SBMM is proud of, things that happened over the past 20 years and that most people don’t know about, even in our local community. In 2015 SBMM received the George & Vivian Obern Preservation Stewardship Award from the Santa Barbara Trust for Historic Preservation. Two years ago, SBMM was ranked one of the Top Ten Maritime Museums in the United States by Marinalife Magazine; and earlier this year, the Santa Barbara Chamber of Commerce selected the Museum as the 2019 Nonprofit of the Year. But most of all, SBMM has been proud of its role in saving and preserving the historic First Order Fresnel Lens from the Point Conception Lighthouse.

Many people do not realize that in 2012 the United States Coast Guard approached SBMM and asked the Museum to submit a proposal to transfer and display the First Order Fresnel Lens from the Point Conception Lighthouse. It was an honor for SBMM to be asked to care for and display this artifact, which many believe is the most important maritime artifact along the Santa Barbara Channel. The 18-foot tall lens, built in Paris in 1854, has 624 glass prisms, and weighs nearly six-thousand pounds.

While the Coast Guard needed an organization to house the lens, they offered no funding for its removal, transportation, cleaning, re-assembly, maintenance, or exhibit displays. SBMM therefore would have to take a major risk in relocating the First Order Fresnel Lens from the Point Conception Lighthouse, which was on a remote bluff-top, with no road access, some 50 miles away from Santa Barbara. This innovative exhibit was especially risky due to the cost, logistics of disassembling, packaging, and moving a huge glass lens from the lighthouse via helicopter for subsequent trucking transport to the Museum.

To properly handle the transportation, cleaning, design, and fabrication of a quality exhibit, and to create a reserve fund for ongoing maintenance and education programming around the lens, the Museum estimated it would need to raise $500,000. At the time, SBMM was still trying to raise the final $350,000 it needed to complete the $1 million buyout of its lease with the City of Santa Barbara. Buying out the lease, which would save SBMM more than $12,000 a month in rent expenses over the next 25 years, was necessary for the long-term stability of the Museum; but the Museum knew the importance of this artifact, the interest from the general public it would create, and the opportunity for growth such an acquisition would provide. As a result, the SBMM Board decided that this opportunity could not be passed on, and one Board Member, Roger Chrisman, with his wife Sarah, came forward and made the original $50,000 gift to start the campaign (and later made another $50,000 gift to become the title sponsor). 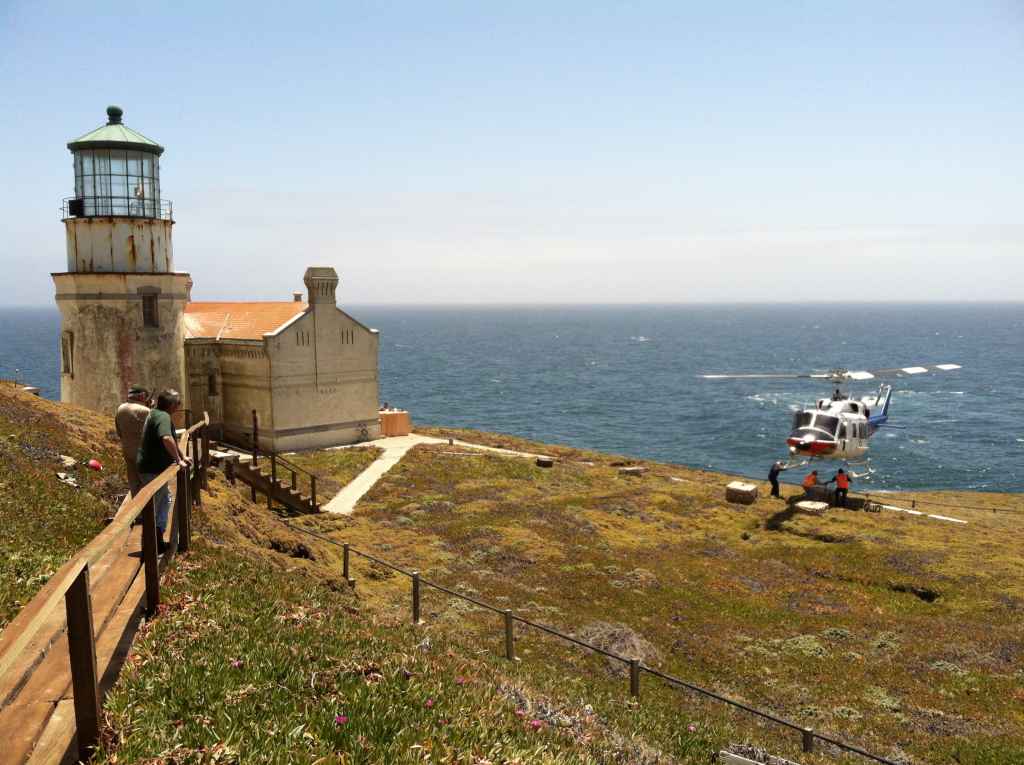 Note the helicopter on the bluff.

To relocate the lens, SBMM had to send Requests for Proposals to five U.S. Coast Guard- designated “Lampists,” the only people allowed to transfer a lens such as this. The Curator also had to work with the landlord and a structural engineer to provide extra support inside the Museum where the lens would stand.  After selection of the Lampists, the Curator had to coordinate logistics with the Coast Guard and the three Lampists who would do the work, and negotiate with a crane company to get supplies down to the remote, stairway-access only bluff where the lighthouse was located, which also involved contracting with county officials to monitor a one-lane bridge for access to the site. Then arrangements had to be made for a helicopter to lift everything from the bluff, for a flatbed truck to travel the 50 miles to Santa Barbara, with Marborg Industries to generously sandblast and repaint all the metal work, and to find Museum space for the Lampists to clean and re-assemble the lens. Because of strong community interest in this momentous project, it was covered by KEYT television, the local ABC affiliate, which aired five different segments on the relocation, and by numerous other media.

The Curator also reached out to an exhibit designer from Los Angeles to work on this exhibit. Installation involved tearing up floor space, exposing and refinishing the building’s historic Maplewood herring-bone flooring, creating four videos for the exhibit, including one of the transfer and assembly of the lens, and creating a display spanning two floors of the Museum.

SBMM has continued to care for this exhibit, which is now the “crown jewel” of the Museum and has created educational programming and talks around its history and Fresnel technology. Jim Woodward, the chief Lampist who oversaw the transfer, later stated that of the 200 lighthouse projects he has worked on, SBMM’s exhibit is the best he had ever seen, both in the United States and around the world. This exhibit also demonstrates the Museum’s continuing collections stewardship role in restoring and displaying a cumbersome historic piece and working closely with the five Coast Guard-approved Lampists to periodically clean and maintain the lens.