Home » Museum Logbook » The Women and The Waves: 93-Letters from Marge

The Women and The Waves: 93-Letters from Marge 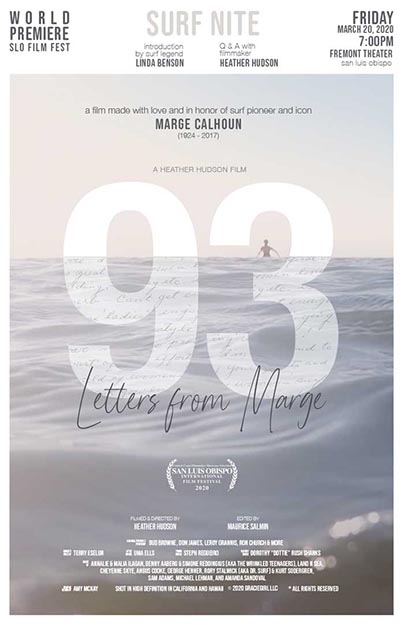 93 – Letters from Marge is a new film about surf pioneer and icon, Marge Calhoun (1924-2017) and is told through letters she wrote during the last years of her life. This sweet and personal film shines a light on the 1958 Makaha International Champion, an inspiring woman who lived life to the fullest.

“Catch a wave for me!” “Love and Aloha” “Never Stop Lady!” are just some of the phrases that Marge Calhoun wrote down when she signed off in her many letters to a friend. Her friend happened to be surf documentary filmmaker, Heather Hudson. So when Marge Calhoun passed away in 2017 at the age of 93, the Santa Barbara based filmmaker was inspired to create a film in her honor and to tell her stories in Marge’s own words from the handwritten letters.

The film chronicles stories from Marge Calhoun’s adventurous life, beginning in a little Hollywood cottage, to her last days while sitting in her home next to a “picture window” with views to the sea and Morro Bay, CA. Though age had taken a toll on her body, Marge’s mind was sharp and could take her anywhere she wanted to go. And “go” she did, back in time to the waves of Malibu, Makaha and Mavericks to name a few! The film features archival footage and photos by vintage surf photographers Bud Browne, Don James, Leroy Grannis, Ron Church and more. The film includes a soundtrack of upbeat and inspiring music by various California artists and highlighted with an original theme song, “Salty Utopia,” written and performed by up and coming Ventura based surf sisters, Annalie & Malia Ilagan.

Marge Calhoun loved the ocean, surfing, and especially BIG waves! Her glass was half full, not empty. She offers words of encouragement and expresses a joy of life and the fact that one is never too old to enjoy the ocean and as Marge says, “the gifts from the powers that be.”

“Marge had such an amazing positive attitude and a gratitude for life!” says Heather Hudson. “I wanted to make a film that honors this positive female role model, a woman whose bright light never dimmed even as she ventured into old age.”

Heather Hudson is a film producer living in Santa Barbara, where she is a community volunteer, a wife and mother of two sons. The one constant in Heather’s life is her absolute love for surfing and the ocean. After receiving a bachelor’s degree in Sociology from UCLA in 1984, Heather worked in advertising until she became a full-time mother in 1991. In 2007, she started her film production company, Graciegirl LLC, and created the groundbreaking documentary surf film, “THE WOMEN AND THE WAVES.” In 2016, the follow-up documentary THE WOMEN AND THE WAVES 2″ was released to the delight of audiences worldwide! And both of those earlier films were also screened at SBMM. For 18 + years, Heather worked with “Heal the Ocean,” a successful Santa Barbara-based non-profit citizen’saction group committed to ending ocean pollution. In 2012, she was named to the Heal the Ocean Board of Directors where she heads up fundraising and events.