One of the common questions visitors ask on seeing the Brooks models is “What scale is that?”  Sometimes they ask because they had built models and were used to working in scales or ratios.  They may have built model cars in 1:24 or 1:32, or doll houses in 1:12, sometimes referred to as 1”=1’ or “One-Inch Scale”.  Sometimes they ask to get a sense of how big the original boat was, such as Nordkap (133’), Rapture (25’) or Gulfstreamer (114’).

It seems Dwight didn’t pay much attention to a specific scale, in other words he didn’t always work in the common model scales. A lot of his models, especially the smaller ones, aren’t strictly scale at all.  They are what is referred to as Fun Scale or LAR Scale (Looks About Right).

He was quoted as saying the boat modelers weren’t building things big enough. The airplane modelers were working in Quarter Scale, literally 1/4 of actual size.  He built some of these very impressive airplane models himself.  The Atlas Van Lines Hydroplane in our collection is 76”.  Unlimited hydros are about 30 feet long so the model would be almost 1/4 scale.  The bigger the models are, the more realistic they look in operation.

His big models, from the large PT boat through Gulfstreamer, were very much scale models.  In many cases, they were built to the drawings of the original boats; but the scale was somewhat arbitrary.  For example, the limit on what he could ship air freight was 10 feet.  So U-406 , Pampanito and Gulfstreamer were all scaled to be as big as they could be and still fit in a ten-foot crate.

Toot-Toot and Nordkap were common models in the modeling community. Dwight actually bought and built the Nordkap kit before building the big one.  In the case of Toot-Toot, he had the plans doubled in size photographically, whereas, for Nordkap, he tripled the plans.

Another interesting fact is that the first Sirius (not in our collection) was a fun scale r/c model of a Rhodes cruiser.  The Sirius in our collection is his second version, which he had redesigned by a friend who was a naval architect, based on the sailing performance of his first one.  It has a one-foot longer waterline and a higher aspect rig with a larger main and smaller mizzen.  So there really is no prototype for Sirius. We have the only one!

Here are the scales Dwight used on his large boat models: 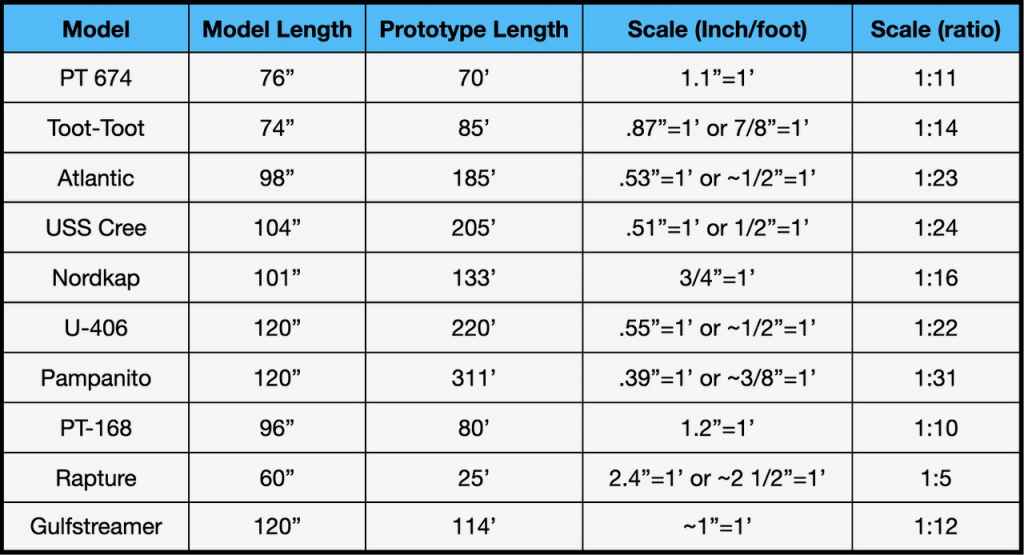