Join Ethan McKinley, Superintendent and Juliana Matos, Biosecurity Manager of Channel Islands National Park, as they review the park’s progress during this past year, while discussing some important updates and future directions for the park. There is much in store for the park in 2021, including the opening of the new Scorpion Pier, proposals on use of the Main Ranch buildings on Santa Rosa Island, and planning efforts for backcountry and wilderness areas. In addition to the park update, the park, United States Navy, and The Nature Conservancy’s Biosecurity Program Manager Juliana Matos will discuss the latest exciting developments for biosecurity on the islands.

McKinley grew up in Littleton, Colorado, and earned a bachelor’s degree in international business and French from the University of Denver. An Eagle Scout, he takes any opportunity to play in the great outdoors (hiking, camping, mountain and road biking, climbing, and mountaineering), frequently exploring national parks in his free time; and he is a self-professed history buff and enjoys photography. Currently, he is one of the youngest superintendents in the entire system; but with a strong background in leveraging private-sector partnerships to further the Park Service’s goals of resource conservation and public access, he’s a natural fit for the Channel Islands. Stan Austin, regional director for the National Park Service’s Pacific West Region, even said “With this unique perspective and his passion for building strong relationships with community stakeholders, I am confident he is the right fit for Channel Islands.” 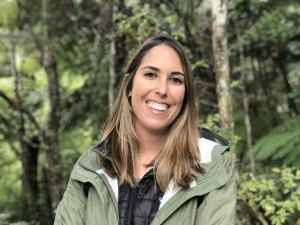 Juli Matos is the Biosecurity Manager for the Channel Islands. Though she is officially employed by the National Park Service, her position is jointly funded by The Nature Conservancy and the U.S. Navy, with her efforts contributing to the missions of all three entities. As the Biosecurity Manager, she promotes the importance of biosecurity through education and outreach, and implements strategies to help prevent, detect, and respond to new invasive species introductions to the Channel Islands. She possesses a B.S. from San Diego State University in Environmental Science and an M.S. from UC Santa Barbara’s Bren School of Environmental Science & Management.