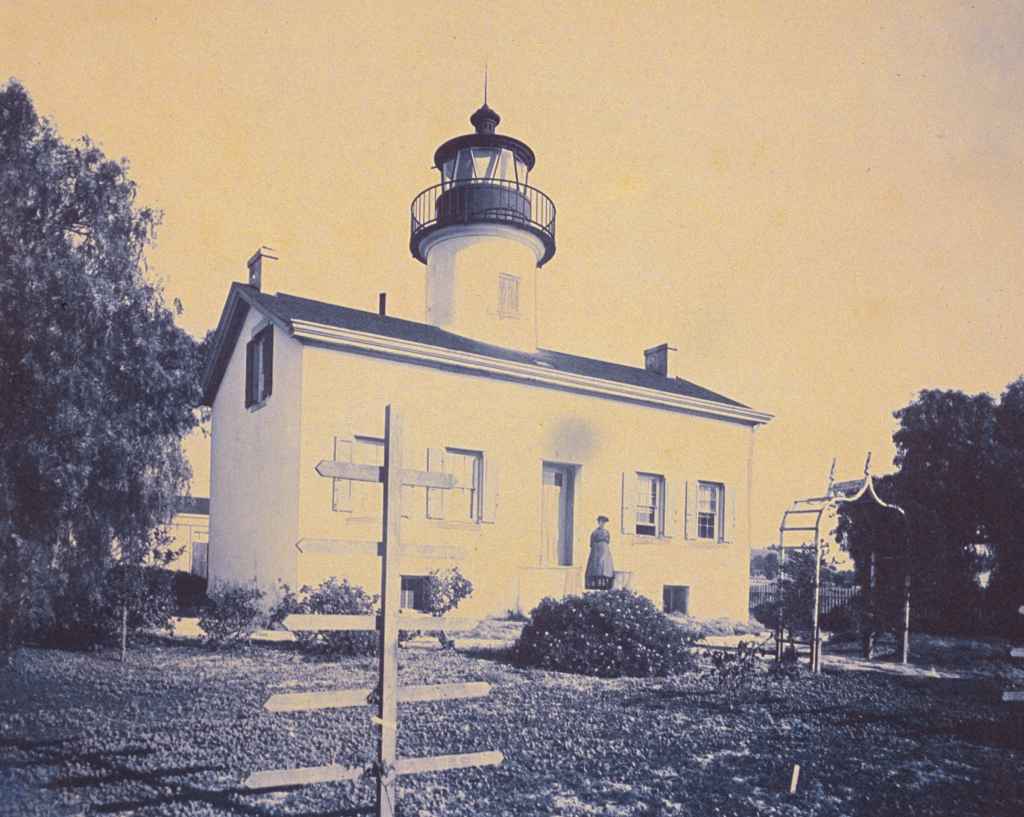 Julia, who was born in New Brunswick, Canada, followed her husband Albert J. Williams to California in 1853 when their first child, Helen Francis, was three years old.  They first settled in San Francisco, where she had a second daughter, and in 1856 they moved to Santa Barbara when Albert was appointed lighthouse keeper there.

At the time, the mesa west of the city was an uninhabited, desolate place.  There were no roads and herds of cattle grazed there. Julia’s son, Bion, later described the family’s trips out to the lighthouse this way: “[There being no road]…they just took to the hills, going out past where the polo grounds are, and following up one of the canyons, came over the hills and down to the mesa.”  He was born after the Williamses took possession of the Santa Barbara Lighthouse, on October 30, 1856.

Albert Williams first lit the fourth order Fresnel lens on December 1, 1856.  It showed a fixed red light that was visible about 12 miles into the Santa Barbara Channel.

Julia’s eldest daughter, Helen, was happy to settle into her new lighthouse home.  Years later she told an interviewer, “It was late in the evening when we reached our destination [their lighthouse home on the mesa], and goods could be piled on the ground.  Mother had fortunately prepared our supper before we left town. So it was not long before father had a fire, and we were eating picnic-fashion. Even now I can remember how beautiful it all seemed. The mesa, like a level plain, seemingly surrounded by majestic mountains and the mysterious ocean, all flooded with wonderful moonlight.  From the base of the high bluff that formed the side of the mesa came the boom of the breakers as they dashed on the rocky walls.”

The Williams family moved into the lighthouse before it was completely finished, even though Helen said, “At last the lighthouse was finished and we settled down to the routine of daily life. The mesa was a wonderful playground. It was carpeted with wildflowers, many of which have become almost extinct. Great herds of cattle covered it, for it was fine grazing land. I remember when it was impossible to get to town for four days because there were so many cattle between us and the city, we dared not risk going. Twice I was chased to the protection of our fenced land.  Yet we never had accidents.”

Eager to be a part of the community, on Christmas Day in 1857, more than a year since the lighthouse began sending its beacon out into the Santa Barbara Channel, Julia invited all the American families to the lighthouse for dinner.  One estimate placed the gathering at “around 30 people” and says a game of baseball was played after dinner.

Eventually, Albert Williams tired of keeping the light and “through some misunderstanding, another keeper was sent to the station in 1860, and the Williams family retreated to a recently acquired ranch nearby. The new keeper stayed only briefly.”  There was a four- to five-year transition period before Julia was appointed keeper at the Santa Barbara Lighthouse on February 13, 1865 and began an almost uninterrupted tenure of 40 years tending the light.  During her tenure, she missed only two nights of work, in 1899, to attend the weddings of her two sons.

As Santa Barbara moved into the 1870s and 1880s the lighthouse with the woman keeper, who was also raising five children, became a major tourist attraction, second only to the Mission. As more tourists came to the lighthouse Julia’s fame grew.  Writers celebrated the dedication to her chosen work with regularity. In 1896, the San Francisco Call wrote at length about Julia, “On the wayside as you journey toward the beacon-tower the scarlet geraniums, tossed by the brisk breeze, show brightly and seem to enjoy the sport. And the fragrant white roses are shedding their sweetest perfume from the trellised arch over the pathway, and behind the building pretty waving green trees are dense with foliage…To the accompaniment of the faint roaring of the breakers that is borne up by the telltale breeze, Mrs. Julia F. Williams tells how for thirty-two years, never missing a single day, she has been constant to her trust.”

Around 1990, another writer said this of Julia: “her hair is gray, and her face is wrinkled as a crumpled bit of tissue paper, but her little figure is as straight as a cadet’s on dress parade and as strong as whip cord, and her eyes as keen, her mind as alert and her opinions as decided as any new woman in the thick of affairs…at the age of seventy-three she can go up her forty steps (ten of which are the smooth, round black rungs of a narrow iron ladder that leads through a tiny trap door into the light tower) as spry as any girl of twenty.”

When asked about the rigors of her life as a lighthouse keeper, Julia told the interviewer, “I’ve never had the time to grow old. I’ve been too busy…Monotonous or tiresome? Why no, I’ve never found it so. We have the sea for company always, and I have been happy and always contented here.”

On Tuesday, May 22, 1905, the Santa Barbara Morning Press headline told the community, “Mrs. Williams Badly Injured.” The newspaper reported that a few days before, Julia had fallen from her bed onto her side. The fall spelled the end to Julia Williams’ career at the Santa Barbara Lighthouse. Unable to fulfill her duties at the light, she was dismissed on leave by the Lighthouse Board.  A modest protest was mounted by friends and others in the Santa Barbara community, but to no avail.  She spent six months at Santa Barbara Cottage Hospital. Although Lighthouse District Inspector H. T. Mayo had given her a longer leave of absence than was allowed, at the urging of her friends, she finally resigned from the lighthouse service on December 1, 1905.

Julia lived on in Santa Barbara for another six years, but she was badly crippled.  She died on July 1, 1911, having witnessed the transition of Santa Barbara from a small Spanish town to a Victorian city, with electric streetlamps, two high-fashion hotels and the Southern Pacific Railroad that ran from Los Angeles to San Francisco.