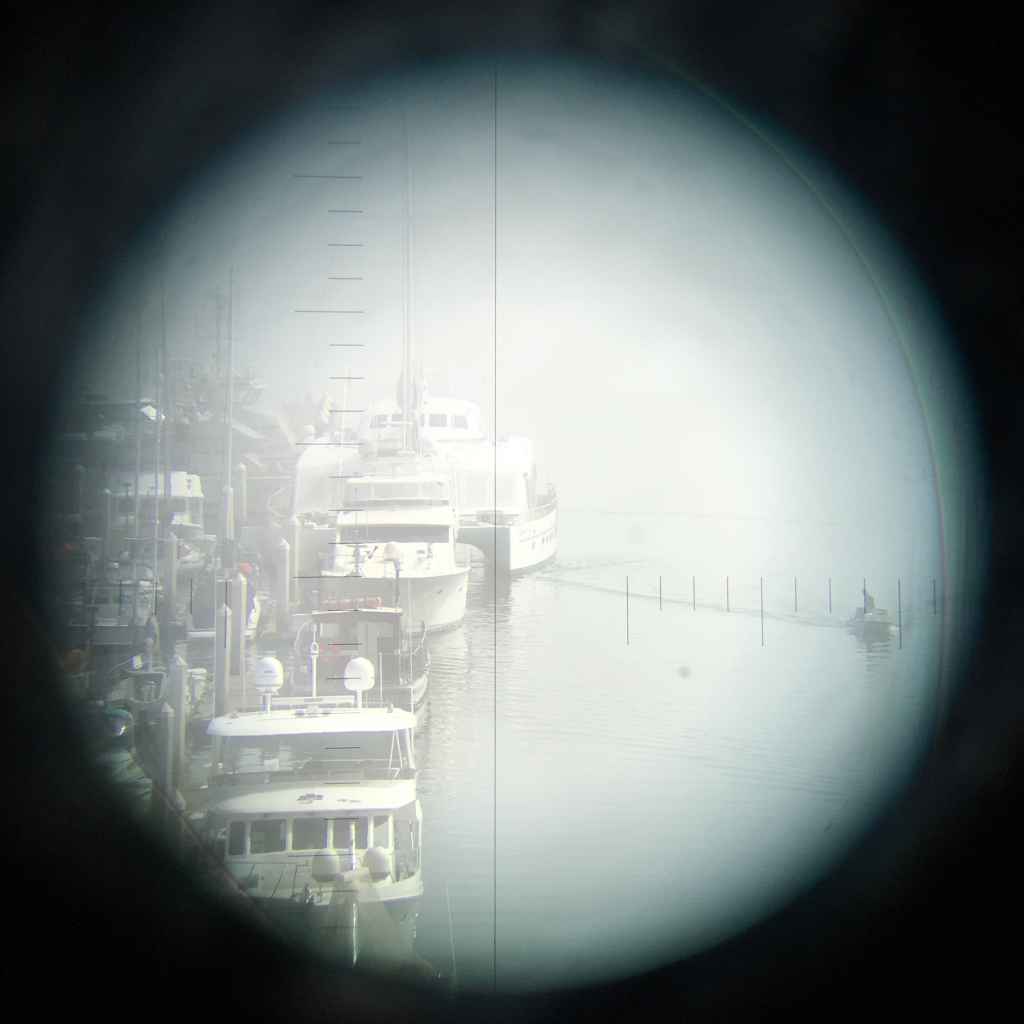 The following article by Catherine French, an SBMM Volunteer, Founding Donor and freelance author, first appeared in the March/April 2000 issue of Currents, the Maritime Museum’s member newsletter.  There have been minor edits for clarity.

“January 26, 2000, marked the exciting installation of a 2 Echo attack periscope. This type of periscope was designed for use on nuclear submarines. Our periscope was on a submarine until its decommissioning in 1983. The periscope was removed and sent to storage at Mare Island in Vallejo California until 1995 when it was moved to the U.S. Navy Cheltenham Annex in Williamsburg, Virginia.

The Museum received the periscope through a surplus program with the Navy and the Naval Historical Center. A special pedestal was built on the mezzanine floor to which the periscope is attached as part of the Military History Exhibit.

Since the periscope literally “breaks through” the roof of the museum building it allows for a spectacular 360-degree view of our city, mountains, coastline, and Channel Islands. The specially designed pedestal allows viewers of all heights to enjoy the scenery.

With a wide 32-degree view and magnification set at 1.5x, the scenery is spectacular from the sparkling sea to the green hills and beautiful homes of the Riviera. The periscope turns easily with handles on each side, and whether your eyesight is 20/20, glasses or not, you get a fantastic view.

The 2 Echo periscope is very similar to ones used on modern day subs, the main difference being the height of only 37 feet.  Today’s periscopes are 46 to 47 feet in length. Made of phosphorous bronze at the base and stainless steel at the top, the 2 Echo was designed to withstand pressures of 1000 psi, which is important to diving depths these subs can achieve.

Engineers from Kollmorgan Electro-Optical, the periscope’s manufacturer, and Seth Hammond of Specialty Crane coordinated the installation of this magnificent addition to the museum.  Akin to threading a needle, the seven-and-a-half-inch diameter 2000-pound periscope was deftly lifted and guided down through a specially engineered fitting in the museum’s roof where it came gently to rest on the uniquely designed pedestal inside.

So the next time you are driving by the harbor, check out the roof of the Maritime Museum. The 22-foot long shiny cylinder with the camouflage tip breaking through the red tile is the latest of the exciting developments taking place at the Santa Barbara Maritime Museum.” – Catherine French

Twenty years later, the periscope is one of the most popular exhibits in the museum, offering a view from almost 60 feet up of the scenery, beaches, and harbor. Kids are excited watching soccer practice over at SBCC, tree top views of palm trees and boats in the channel. Teens are amazed that there is no video involved and that they are essentially looking through a telescope and a couple of mirrors.